Now that the first hand in has been and gone, I’ve been finishing off the rigging of the monkey. There were a few bones in the face that I had animated for the deform test that weren’t actually rigged. Firstly, I created some curves to control the ears and the two tufts of hair on the monkey’s head.

One of the most important things I still needed to create was some eye controllers. I wanted each eye to be controllable individually, but I also wanted the animator to be able to easily control them together. As such I decided to create two text curves (R and L) and aligned them with the eyes. I then used an aim constraint so that the eyes point at the controllers at all times. I created a third controller that would move both R and L together. 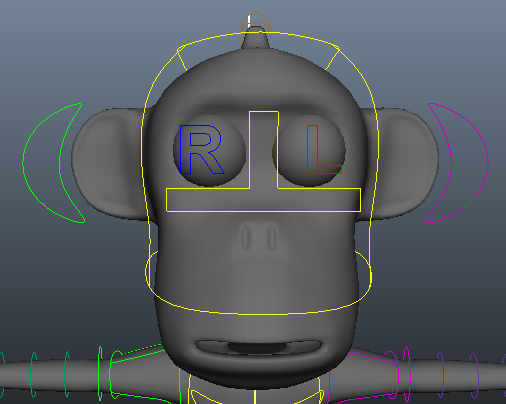 I also wanted the animator to be able to control the size of the pupil, as I have always found this to be a particularly effective tool to portray emotion when animating a “toony” character. Unsure of whether the animator would want to be able to control the pupil size from the individual eye controllers or from the dual controller. I decided to give them the ability to do it from either. I added an attribute to R and L for pupil size, and two attributes to the dual controller. I then wired these attributes to two plus/minus nodes. I have set the nodes to addition and as soon as I have the eye textures, I will wire the nodes to the scale of the texture. 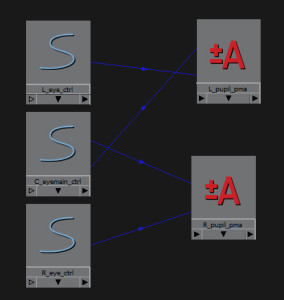 Rigging the tongue was slightly frustrating as I really struggled to create controllers that could be selected whatever position the tongue was in. Initially I created simple curves that sat above the tongue. However, when the tongue was rotated upwards, the top curve disappeared into the back of the mouth. 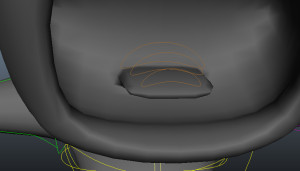 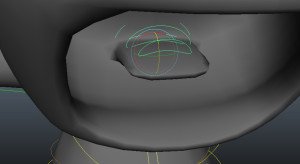 As such, I decided to create some loops that went around the tongue and combine these with the curves above the tongue.